Lately I’ve been working on re-writing Tracee from Python to Go. Tracee is a system tracing tool based on eBPF, a Linux technology that we used for collecting the events in the kernel (for an introduction to eBPF see here). Tracee is using the bcc project to easily work with eBPF.
During the migration from Python to Go, we moved from using bcc’s python library to the gobpf library, which was supposed to offer similar functionality to the bcc’s Python library. However, during the migration we have noticed a missing functionality in the gobpf library - the ability to handle “lost events”. In this post we’ll discuss what exactly are those lost events and how we implemented this missing feature in gobpf.

Before we continue, we need to understand how events we collected with eBPF make their way to our program. eBPF runs in the kernel, and there are several mechanisms to communicate information between kernel-space and users-pace but the most common for eBPF, and what ‘bcc’ is recommending, is the ‘perf’ subsystem. perf predates eBPF, and have been used to collect performance measurements from the OS (and from hardware) for a long time. In order to communicate performance data, perf offers a mechanism based on a ‘ring buffer’. 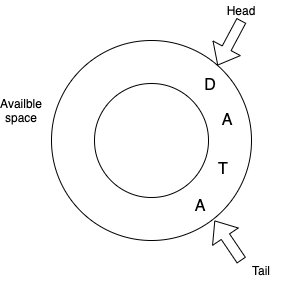 A ring buffer (a.k.a circular buffer) is a contiguous memory area that the producer and the consumer can read and write to simultaneously. It’s called “ring” because once the buffer has filled, the producer will continue to write data at the beginning of the buffer, so a fixed sized ring buffer could potentially accommodate an infinite stream of events. But what happens when the buffer is filled and the consumer has not (yet) read it’s data? Depending on the implementation, the producer will overwrite existing data, or lose the event.

In order to understand what happens in bcc, we will track the flow of code from the lines we wrote in bcc, down the layers of abstraction to the perf ring buffer.

In your Python code, you are instructed to instantiate a BPF class and:

This shows us what the system does with the lost events callback that we provided - it was just registered with the appropriate reader. When is this callback called? Let’s move on to look at the other method we mentioned.

So now we know that our lost events callback was triggered when bcc found events of type PERF_RECORD_LOST. But we never submitted events of this type. All we did in our eBPF program was use the perf_submit function. How did those event got there? Let’s look at what happens when we submit events.

To submit events from our eBPF (C) program, we are instructed to initialize a “table” using the BPF_PERF_OUTPUT macro, and then call the perf_submit bcc C helper function.

That’s it! we have found out that “lost events” are events that couldn’t be written to the perf ring buffer because there wasn’t enough space. When this happens, the bcc “reader” will call the callback that was given to it when it was created. 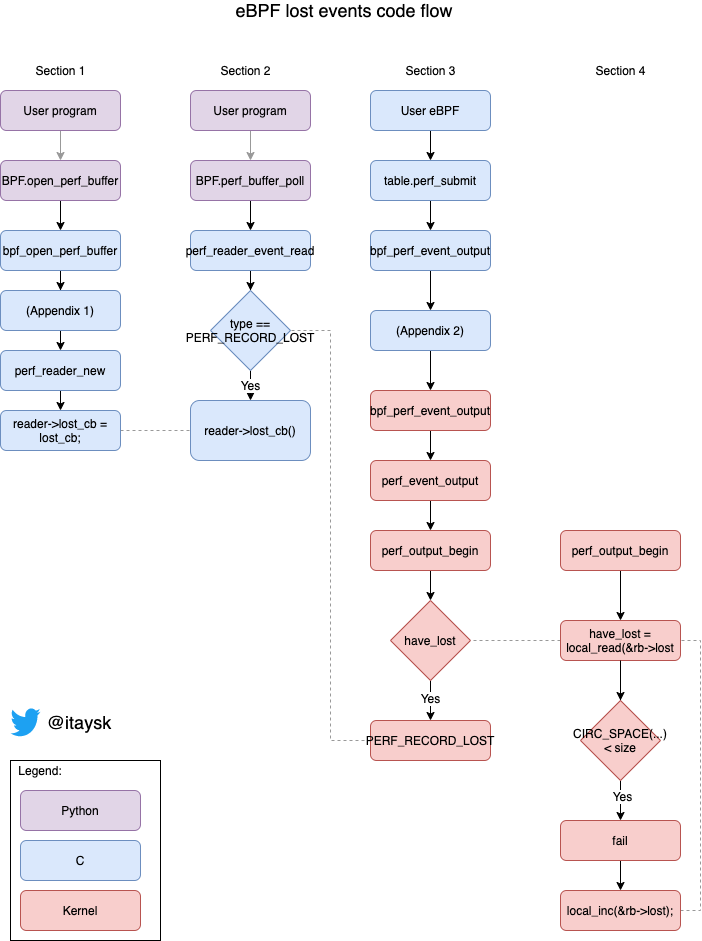 You can follow along the dotted line from end to start to visualize the logical chain.

Now that we know what are lost events, let’s get back to our original problem that gobpf didn’t ask us for a lost callback. Here’s the fix that I submitted: https://github.com/iovisor/gobpf/pull/235. Let’s review it:

The change is contained in the bcc/perf.go file. This time I will not go through every single step because this change is more readable. The highlights are: